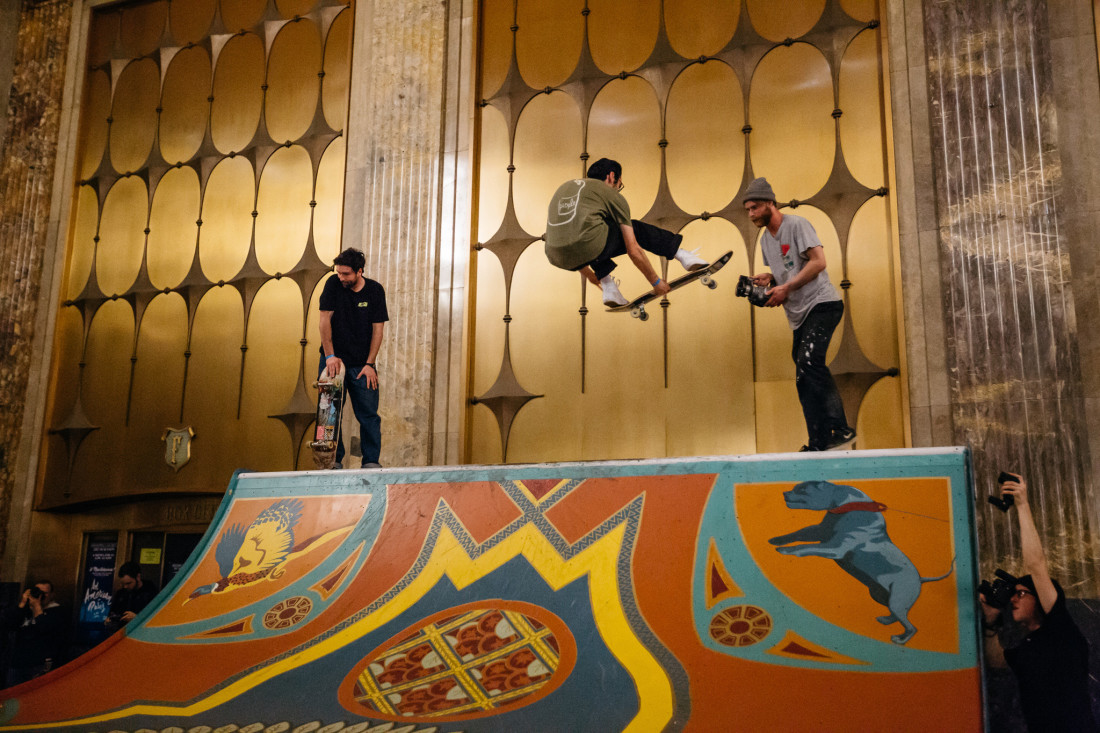 Cayden Byington looks younger than his 14 years, but handled his skateboard like an old pro Monday on what may be Michigan’s most unique half-pipe, set up inside Detroit’s Fisher Building.

“It’s really cool, just being around all this old architecture and the marble,” the Wayland teen said, looking up at the ornate ceiling. “It’s really breathtaking in here.”

The Fisher Halfpipe event is meant to bring people together and celebrate American invention, said Everard Findlay, chief innovation officer of the Platform, a Detroit development firm that co-owns the building in New Center. Skaters and spectators are invited to drop in from 6 p.m. to 9 p.m. through Thursday.

Four at a time, professional and semi-pro skateboarders will ride the 26-foot-long, 16-foot-wide ramp, surrounded by classic 1920s Detroit architecture in what’s widely considered the most beautifully designed and ornamented arcade in the city.

Findlay said the skateboard is a true American invention, and the project celebrates Detroit’s role in American innovation. The art deco Fisher Building, designed by renowned architect Albert Kahn, was built by the family that owned Fisher Body, an automobile coach-builder.

The event includes live music and food. Celebrities as well as visitors from as far away as France and Belgium are expected to attend.

“It’s just a celebration of these things that are kind of bringing Detroit together,” Findlay said.

The Fisher was buzzing late Monday afternoon as dozens of spectators watched pros and semi-pros tackle the half-pipe with skateboards, inline skates and BMX bikes. Music, the sound of wheels soaring across wood and the occasional thud — when someone took a spill — echoed throughout the building’s lobby.

Bridget O’Connor of Sterling Heights watched with her wide-eyed, 6-year-old granddaughter, Ella Simon, in her arms.

“It’s awesome. I love the fact that they’re trying to bring all these folks together. It’s such a beautiful venue,” O’Connor said.

Dan Austin, a spokesman for the Platform, said that after years of struggling with occupancy, the Fisher Building is now part of new life in New Center as the Q-Line and other developments bring more energy to the area.

As part of a series of planned renovations for the building, the Platform brought artisans in earlier this year to repair and touch up the ornate murals that cover the soaring, vaulted arcade.

The half-pipe was built in metro Detroit. Artists used bright colors and nature-inspired designs to reflect styles seen throughout the Fisher’s interior. It’s on a 4-foot-high platform and stands about 8.5 feet high.

The public is invited to observe, and depending on availability, amateur skaters may get a chance to ride the half-pipe.

After signing a waiver, Cayden stood at the top of the half-pipe with calm focus, standing among people twice his age as he waited his turn. He finally lowered his board and smoothly glided back and forth.

“It’s pretty slippery,” he said afterward, “and I was feeling nervous with so many people watching. But it really was a lot of fun.”

Read on the Vice